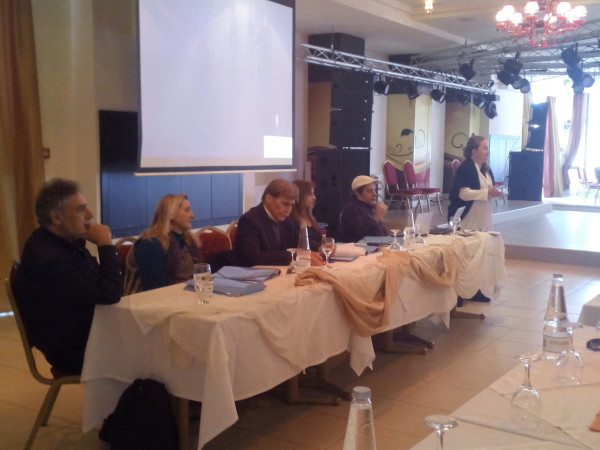 5th Interdisciplinary Conference on “Art Therapy: Methods of Education through the Arts for People with Disabilities”

In Mouzaki, on the welcoming premises of the Mouzaki Palace hotel, the 5th Interdisciplinary Two-Day Workshop on “Art Therapy: Methods of Education through the Arts for the People with Disabilities” was organized by the Artistic Group “Dryades en Plo”, which took place on the weekend of 26 – 27 March. The Two-Day Workshop, under the auspices of the Ministry of Education, Research and Religious Affairs, the Ministry of Culture and Sport, the Greek Choreographers Association and the Greek Unesco Division, was successful, attracting the interest of many participants from all over Greece. 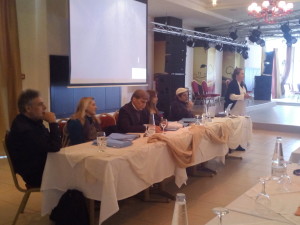 The Two-Day Worskhop, a pro-festive event of the 3rd Panhellenic Meeting of Dance Groups of People with Disabilities and Mixed Dance Groups (Karditsa, 28-29/5/2016), included a theoretical and practical part. On the first day, proposals were presented by

who won over the attention of the participants. Experiential workshops in musical therapy and drama therapy followed by the respective rapporteurs.

On the second day proposals continued by

Experiential workshops followed by Dr. Christakis, Mrs. Varsamopoulou (visual therapy) and Mrs. Karapanagioti (dance therapy). In the long experiential workshops the participants received, besides the scientific information, the stigma of the ability to create dance groups in their field as well. At the end of the Workshop, the participants received a certificate of participation and rich material related to the subject. The workshop was attended by a representative of the Ministry of Education, Research and Religious Affairs, Mr. Stefanos Koutras, PhD Special Educational Consultant, while the Minister of Karditsa, Ms. Panagiota Vrantza, gave an address on Saturday.

The event, the fifth in a series of similar events held in Karditsa, Thessaloniki and Lake Plastiras since 2013, was mainly addressed to special educators, doctors, psychologists, nurses, dance teachers, trainers, animators, art therapists, occupational therapists, social workers, physiotherapists, professionals and special education students, people with disabilities, including mental health, as well as those interested in the subject or those who come into contact with people with disabilities in general. Participation in the Two-Day workshop was great, especially by professionals and students in relevant faculties. The interest and satisfaction of all was evident and demonstrates the sensitivity and love that can be cultivated for our fellow humans.

“Dryades en Plo” thanks the participants for their interest and is committed to the resumption of relevant events. Also, we wish to thank the conference speakers for their cooperation, as well as all the sponsors, Kastalia Psychiatric Clinic of Karditsa, Hotel Mouzaki Palace, Kissas Dairy Industry, Stathis Bookstore, Dance School Maria Karapanagioti and communication sponsors, mouzakinews.gr, thanks to which education and culture are supported during hard times; also, the Mouzaki Palace Hotel for the cooperation and the operators of the agencies that provided their help at the event.